The first day we arrived in Poznan we were introduced to pączkis, and from that moment I knew there was something special in this city that stuffs their donuts with date jam. It also felt like we traveled back in time 50 years because of their extensive and retro cable-car system that undoubtedly had the most picturesque lime green cars.

We had been walking for two hours, a self guided tour that was meant with grunts and sighs since the inclement weather reminded us of Copenhagen on a bad day. The tour had been over for twenty minutes and now we were searching for something, the incompetent TA previously mentioned was obviously in possession of the directions. As it turns out we were exactly two doors away from our destination, but the brisk Polish rain was too much fun to leave. Soon we walked into the traditional Polish restaurant, men with ties in the front room, and we were escorted to the back and up a stairway that was adorned with what seemed like a mixture of cooking and war tools from the medieval times. We soon saw the wide open room with one long cooking island, preset with all of the ingredients needed for us to learn how to make our own Polish pierogies. Our token Polish student told stories of how she had eaten to beyond stuffed at many family holiday meals by way of pierogies. We gathered around the table and made pierogies stuffed with fruit, cheese, and a meat mixture that eerily reminded me of my mother’s croquetas (PSA: they really are just uniquely stuffed boiled dumplings (small world, similar food)). After it was confirmed that I definitely do not have a future in pastry or pierogi making, were were able to watch them cook, and then devour them with a spread of other traditional Danish food. As we sat around the table, exhausted from our 6AM bus ride from Germany, still wearing the aprons used during the preparation of the pierogies, we talked about everything under the sun, and I realized that the people in my core class were just a bunch of gems.

After braving the winter rain and our first two hospital visits, it finally cleared up to an overcast afternoon that we spent touring the city we had been in. It looked so militant from the glimpses I saw on the bus ride in, but we turned a corner and suddenly we were in the Old Town Square. It was completed with a redone Italian City Hall, lines of pastel buildings, and a perfectly salmon colored church around the corner. This is the Poland I dreamed of. Each individual building lining the square had its own decorative roof adornments and pattern or color. There were fountains that I am sure would be a major attraction in the summer months. The pink church around the corner was hidden until the angle was just right. We went in and it looked like I had been engulfed by the deepest parts of Heaven. The heavy and dark robust paintings and architecture were in all directions. Shortly after entering a mass began with a loud song, something I think is becoming a theme for my church visits. While walking past the church again, I saw a group of four nuns directly in the middle of the street, their black outfits so beautifully contrasting the bright pink of the building they represent. Poland, we were told, is an astonishingly Catholic country. This wasn’t made real to us until later that night, while walking past the same church hiding bottles of wine in fear of unknown laws, where we spotted a large gathering of people next to our hotel. We then noticed the police cars and lights, and the distinct sound of someone on a megaphone. At first it was nothing but fear, we even lowered our versus as to not be pinned as Americans, but as we got closer we realized the mass of people was walking. It was a march. It was made up of mostly older people, and the sounds over the loudspeaker sounded to be prayers and hymns. Once inside the hotel, the front desk informed us that it was a traditional march for the Way of the Saints. And suddenly I wanted to run outside and join them. After much coaxing from my friends, I relinquished my conviction to do so, but what an experience that would have been. It is one thing to see a mass in a foreign country, but to walk with the people who share the same beliefs as you even though continents and history separate you would’ve been magical.

The most amazing thing I saw during my time in Poland was a whirlwind. As we arrived late to our visit to the Gynecology and Perinatology visit, led by our favorite TA, we got dressed into our darling scrubs and were met by our host, who looked stunningly like Angelina Jolie. The first thing she says to us is that we are going to start our day by seeing a C-section if that’s okay with us. “Um hell yes” I discreetly or not so discreetly said under my breath. Five minutes later we were in the OR with face masks and gowns but not even gloves on. We saw the entire procedure, done by men who looked like they had 50 years of experience and a duck sandwich waiting for them at lunch when they got finished. They made the first incision, and then went layer by layer until a few minutes later we got to see the distinct hairs on the babies head, we had made it to the uterus. After draining the amniotic fluid, the baby was essentially pulled by its head out, given a good rub, and then took its first gasp of air and had his first cry. He was then wrapped in a pink blanket, which the nurses immediately joked about, and then brought to his mother for his very first kiss. A moment one of them will never remember, and the other one will never forget. I cried during the first breath and during the first kiss. It was amazing to see a tiny human come alive into the world after the miracle of pregnancy. Thank God for Polish hospitals with minute rules. No matter what country or culture you are in, the sight of a first breath is a miracle. 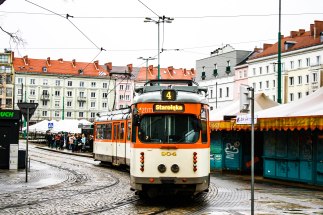 I’m officially in my dinosaur sweater and trousers at a winery era
Castles + scarves + fish and chips
Finally posting my Edinburgh rooftops on a moody December afternoon
I am thankful that I got to spend over a month working in Africa this summer. I was sweaty!
Trying out gratitude this week: I am thankful for a new city and an urban jungle a few blocks from my house
Lots of art lately - This room is my biggest passion in life right now
Loading Comments...
%d bloggers like this: