The train to Prague was set to be four hours, little did I know I would spend those four hours with my fingers crossed. As it turns out, there is an influx of people at each stop and they could be holding a ticket for the seat you are currently in, displacing you to the floor or standing in between cars by the bathroom. I’m a tough cookie but I would really love to not stand for the next four hours. Luckily I only got displaced once, but a classmate whom I unintentionally found on the train was not so lucky. Once I navigated my way out of the train station that taught me the importance of internationally recognizable symbols (which this station had none of) I found my new travelling companion at the hostel bar happy hour.

We had planned to partake in the free walking tour the next morning, but after sooooomeone had to go back to their room we missed the group leave the hostel, but found them at the bus stop. Unsure of who we were following, we got on and off with the biggest group of people. After we got off the bus, we stood around the group, staring, waiting for the guide to emerge and start our tour. I had the strange feeling that the group was oddly homogeneous. I even made a comment that they were staring at us. With a double dose of intuition we realized we had just crashed a school group thinking it was our tour group. So now we are off the bus, with no leader. Luckily we are smart so decided to go to the handy brochure and head to the first stop. Sadly this was not the only time we lost the group, but the second time was because of a coffee addiction.

That day we climbed the clock tower that houses the astronomical clock. Apparently this is a big f*cking deal, and I didn’t even know it existed. Mental note to pay attention during astronomy lectures. Every hour on the hour when it rings there is a little mechanical show that was voted the 2nd most disappointing  tourist attraction after the Mona Lisa. We were inspired on what seemed like the top of the middle of the city, and we planned to go get cultured that night at the opera, but there were no two seats left. We came back before the show to see if we could scalp tickets, because we are teenagers at a country concert. Nada. We headed to the symphony…sold out… then to the philharmonic…. sold out. Now it is 7:30, we are all dressed up with no where to go, a girl’s worst nightmare. We start furiously searching on the phone about shows that night. I see in big letters DON GIOVANNI, which rang a bell from the walking tour, I knew that one, that’s very famous, I flash the screen at Ryan and at this point he would agree to anything. I buy the tickets right there to pick up at the theater. We head to the theater and we turn a corner to be greeted by a posse of homeless men, and I catch a glimpse of a poster that doesn’t seem quite right. I freeze. We walk a few more feet. I freeze as my brain wraps around what just happened. This opera was at the Marionette Theater, which as it turns out, is not a name like Marilyn or Marie Antoinette, no, marionette means puppet. I just purchased tickets to the puppet opera. We are standing, jaws on the floor, staring the narrow wooden door in the dark side-street that leads to the puppet theater. I could have peed my pants laughing, and I almost did. “I’ll take the blame on this one.” I say while laughing as I get the funniest look of disbelief mixed with pure entertainment from him. So I try to think of other things to do, he stops me in my tracks. “Well, we already have the tickets.” Now I have the look of astonishment. And we did it. With the help of a subpar langos and four bottles of wine we watched the puppet opera surrounded by kids and frequenters of the geriatric ward, and it was one of the best nights of my life.

The next day my shin splints developed as we crossed the Charles Bridge for our day of seemingly endless travel uphill. We visited the Old Royal Palace first, where we unintentionally witnessed the changing of the guards and a funeral for a priest from St. Vitus cathedral. We saw armor, banquet halls, (almost) ancient churches, replicas, and ate a hot dog with a view. After we strolled through the surrounding town and made it to the monastery where we saw a library and cabinet room that transported us to around 1500 A.D. There were books that looked like they would turn to dust if disturbed and animals of all kind, and even shells(!) and I felt at home. What is a trip to a church without a beer? The monastery brewery provided just what we needed. The air got thinner as we climbed the hill further to get to the Eiffel Tower replica structure. We were going to conquer it, the burn in my thighs from the hill wasn’t going to stop me now. There was an elevator, but who needs them, we’ve got legs lets use them. This was my inner mantra as I was internally screaming while sweating and consequently stripping while climbing. The view from up top was spectacular, but it’s funny how cities fade into roof pixels when you’re so far up and it makes them all kind of look the same. There might be some comfort in the world being so small after all.

The next morning we headed to the Cafe Louvre and sat at the table with a very official looking plaque, and there over an omelet and coffee, I learned how to play chess. Soon after bumping every single table on the way out with my suitcase I was headed to the airport to come “home.” Home it is, and the week I was away was too long. It seemed like a different town, it was over twenty degrees Celsius and people had come out of the woodwork filling the tiny metropolis to the gills. This is where I get to live, and that’s pretty damn cool. 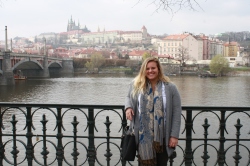 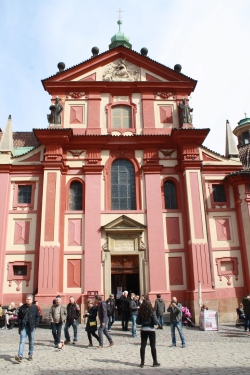 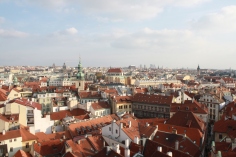 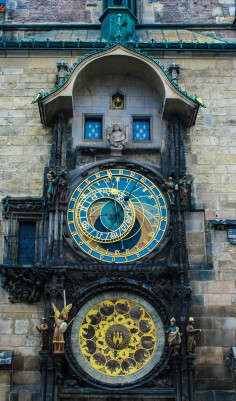