I got on the 9AM train out of Roma Termini train station. I thought My god… I haven’t done this in a while. The hustle and bustle of commuters caught me off guard, but I found peace on the local train on the farthest freaking platform possible. That train was headed to Frascati. Frascati is a small, very small, town south of Rome, but only a thirty minute train ride away. It is known for possibly(!) being the birthplace and location of the best white wine in the country. I arrived at the one platform, one room building that was the train station, and instantly needed a cappuccino. I scaled the small hill to get to the main level of the town, and searched far and wide for a taxi to get me to my primary destination, Santa Benedetta winery.

I arrived through the gates of the cantina 10 minutes later and was awestruck by the farmhouse and vineyard in front of me. I was a bit early, so I wandered the grounds taking pictures, secretly hoping no one would catch me trespassing. Finally a man found me, and his name was Alberto. His first words to me were “Are you alone? Why?” and my response of course was “Why not?” Alberto proceeded to show me around the grounds, and tell me about the 300 year history of this monastery turned winery that has been in his family since inception when his great great great….. grandmother was a nun in the same building. We stood beneath the trees between the withered vines that have yet to be cultivated for the new season. I asked him questions about the process of making wine, his family, and his opinions. He traveled to Asia and Africa for more than ten years, he has two sons, and he believes everyone should know English. He showed me the dining hall(?)(room with all the tables) and I knew immediately I was going to get married on that premises. Between the chandeliers, the family photos that he proudly posed with, and the view of the vineyard, I was hooked. He then took me to the upstairs of the farmhouse, which turned out to have a lovely apartment (bridal suite anyone?!?!?) and another event space overlooking the property. The copper pots and pans, the grand piano, and the Italian opera playing through the speakers really made it for me. I sat at a table, and the other place setting that was set out was quickly taken away; Alberto trying to hide that he assumed I wouldn’t come alone. He sat down with me, poured me three different types of wine, then poured some more, so I could have a full meal with the plates he and his right hand man, Getulio, had cooked up for me. I asked if he was going to drink with me, but he said he had a dentist appointment to go to, but left the three wines on the table and said Getulio would take me back to the town whenever I wanted. I started crying. I don’t know why I was so emotional, but I could bet it was because of the wonderful human beings… and the wine, lots of wine. Before Alberto left, I asked if I could take a portrait of him, because he just got done showing me the work of Sebastiao Salgado. He said he was a photographer for 15 years, and led me to the window where there was the best light. The pressure was on, but he wanted me to send it to him no matter the final product. 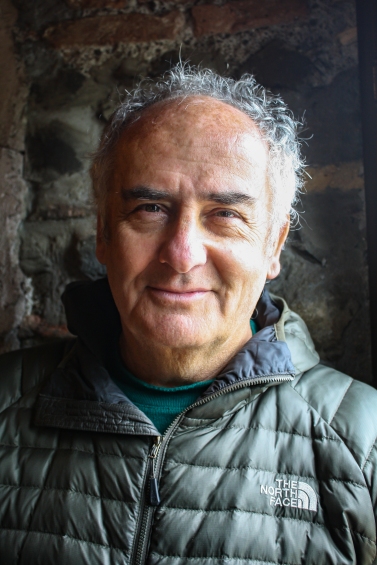 I arrived by chariot (early 90s Fiat) back into the town and was given a brief tour by my new friend, Getulio. The rain clouds were rolling in, and I found some shelter at a restaurant overlooking Rome where I ate (of course) cacio e pepe, and I remained there until my pasta making class. Once we got to Tinello 28, we were offered tastings of two wines, red and white, and then we began the pasta making process. Egg, flour, and a pinch of salt. Who knew it was that easy? My knew friends, Emily and Kjiersten, and I kneaded, rolled, and juggled our pasta before we cut it into our respective pasta types. I chose the thickest option, pappardelle. The wine flowed and the sauces were chosen. I went last and the teacher threw in some pork cheek and truffle sauce into my cacio e pepe (Second time in one day? Of course, duh!) and told me not to tell anyone. It was quite possibly the most delicious spin on the dish I have ever had, and I had made it. Who says I can’t cook now, Mom? I caught the evening train back into Rome, a bit flushed, with a full stomach, and unknowingly awaiting the call that would change my Iceland plans….

I definitely thought this was going to happen month one of quarantine. I’m proud of my restraint up until this point.
Mentally I’m here
I can’t wait to go back to Asia when this is all over. Japan, I’m coming for you!!
Thinking about how I still have the limoncello from this trip in my freezer
Architectural photos hit different after watching British designs shows in bed for three hours straight
I would kill to stroll through this museum in my favorite overalls right now
Loading Comments...
Comment
×
%d bloggers like this: